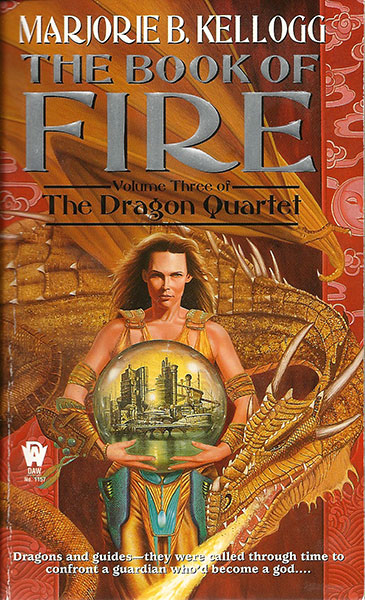 THE BOOK OF FIRE

In the Beginning, four mighty dragons raised of elemental energies were put to work creating the World. They were called Earth, Water, Fire and Air. When the work was done, and the World set in motion, the four went to ground to sleep out this particular history, and not rise again till World’s End.

A desperate Call across time has brought together the dragons Earth and Water, and their human guides, Erde from 913 and N’doch from 2013, and flung them into a further future: a devastated America, where the intemperate dragon Fire has established a reign of terror.

The Call has certainly not come from him, as he rules as a god instead of a guardian, and his guide Paia has been made his high priestess, her true role and destiny concealed from her.

Before the Quest to find the Caller can continue, Fire must be brought back to the path the dragons and their guides are fated to follow. Can Paia be convinced to work against her lordly master? And what of the fourth dragon, Air, who is nowhere to be found?  Could someone be holding her somewhere against her will? Who or what could possess such power? And where…and why?